Vents on homes create openings for flying embers.  Ember entry through vents can result in ignition of combustible materials in the attic, and result in a building burning from the inside out.  The importance of ember and flame entry into vents during wildfires has resulted in the development of commercially available vents designed to resist the intrusion of embers and flame, and recommendations for new or retrofit vents to protect existing openings.  Ember resistant vents are adrressed in Chapter 7A of the California Building Code. 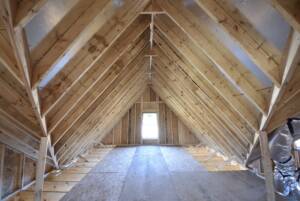 If enough embers are able to enter the building through a vent or open window, they can ignite materials inside the building. An ember that gets inside an attic or crawl space could ignite items stored in those locations, such as newspapers, cardboard boxes, or insulation.

The current building code calls for vents to be covered with a noncombustible (metal) wire-mesh screen to prevent small rodents from entering these spaces. The building code now allows 1/8 inch mesh screening for vents, and this size is certainly better from an ember-intrusion perspective than the 1/4 inch minimum mesh size that was previously required. However, laboratory studies have shown that embers passing through 1/8 inch screening can still have enough energy to ignite fine fuels (Quarles 2009). Even though finer mesh screening uses wire with a smaller diameter, the total amount of void space (no wire) is reduced when finer mesh screen is used.

New vents designed specifically to resist intrusion of embers and flames are commercially available. These vents typically incorporate a finer-mesh secondary screen and other design features. Commercial availability of these vents has preceded an accepted procedure to evaluate their performance, but a standard is currently being developed by an American Society for Testing and Materials (ASTM) task group.

The importance of ember and flame entry into vents during wildfires has resulted in the development of vents designed to resist the intrusion of embers and flame. This development has been encouraged by language in Chapter 7A of the California Building Code.

Chapter 7A says that vents must resist the intrusion of embers and flames, or that they shall be protected by corrosion resistant noncombustible wire mesh screen with 1/4″ openings. 1/8″ mesh is also allowed, and is preferred based on recent research, and experience and knowledge gained in large WUI wildfires. Vent designs that incorporate plastic components would not comply with the noncombustible wire mesh screen language in Chapter 7A.

Chapter 7A language also specifies that vents cannot be used in an eave application unless that vent has been shown to resist the intrusion of embers and flame. Although there are a now few vents that have been accepted for use by the California OSFM, a design that incorporates two sets of through roof vents, one set for inlet air located near the roof edge, and another for outlet air located near the ridge (as shown here), has been used. Modifications to Chapter 7A that would provide for more prescriptive measures for complying are currently being considered by the California Building Standards Commission.

Several vents have been accepted for use by the Office of the State Fire Marshal – these vents can be used in applications where ember and flame intrusion resistance is required. These vents typically use a combination of screening and other design features such as baffles or intumescent materials to resist intrusion of embers and flames.

Seven ways residents can reduce wildfire risk infographic by NFPA
Download the free wildfire safety infographic with seven tips for residents to help protect their homes in an event of a wildfire.

Wildfire risk reduction safety tips by NFPA
By working together, residents can make their own property, and their neighborhood, much safer from wildfire.